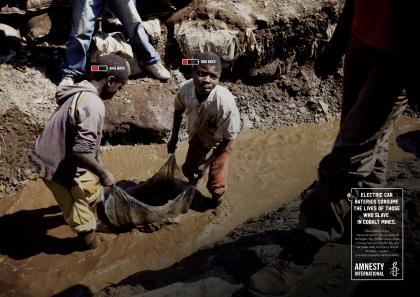 The industry is still failing to responsibly source cobalt, a mineral that’s critical for their batteries.

More than half of the world’s cobalt, a key component in lithium-ion batteries, comes from the Democratic Republic of the Congo (DRC). In 2016, Amnesty International exposed how much of it is mined there by hand, by children and adults, in hazardous and exploitative conditions, sometimes in tunnels dug deep underground.

Eco-conscious customers are entitled to know whether their new cars are as ethical as the adverts claim.

Artisanal miners hold up handfuls of cobalt ore (left) and copper ore (right) that they have scavenged from the mounds of tailings from active and inactive industrial mine sites near Lake Malo, Kapata on the outskirts of Kolwezi, in the DRC.

Six major manufacturers unveiling or displaying electric cars over the next fortnight are Daimler, Renault, Volkswagen, General Motors, Tesla, BMW, and Fiat-Chrysler. Despite some progress over the course of 2018, Amnesty International  found that none has taken sufficient action to ensure that their potential customers can verify whether or not their cobalt supply chains are abuse-free.

Amnesty previously assessed the companies’ cobalt-sourcing practices in November 2017. We found that electric vehicle companies are lagging behind other sectors when it comes to cleaning up their batteries.

On a recent visit to the mining town of Kolwezi in the south of the DRC, an Amnesty researcher saw how small-scale artisanal mining of cobalt appears to have increased significantly there over the past year, as cobalt prices have soared in response to growing consumer demand.

Abuse is not inevitable in artisanal mines, and the government of the DRC has promised to take steps to regulate them better, and eliminate child labour by 2025. However, the sector’s quick expansion means it’s more important than ever that companies trace the sources of their cobalt and show it was not mined in hazardous conditions.

Under international guidelines set out by the Organisation for Economic Co-operation and Development (OECD), businesses which use cobalt mined in the DRC must be able to identify the companies who smelt and refine (process) their cobalt. They must then disclose their assessments of the smelter and refiners’ due diligence practices. Unless they can do this, there’s no way to be sure their cobalt is abuse-free.

All the companies that replied said that they had strengthened policies within their supply chains and pushed for more audits, yet no company had taken the critical step of publicly disclosing their assessment of their suppliers’ human rights due diligence.

Volkswagen claims to have strengthened its rules that call for “maximum transparency” among suppliers, and Daimler has made efforts to increase transparency in supply chains when awarding new supplier contracts , but neither company has yet disclosed their smelters and refiners.

Several companies said they have joined industry initiatives which cooperate on cobalt supply chains. While these efforts are welcome, on their own they are not enough and companies must also accept individual responsibility for cleaning up their supply chains.

Other companies said they are funding pilot projects intended to collect data related to workplace incidents, production, child labour, and social conditions. It remains too early to assess whether these initiatives will have an impact.

Initiatives that work towards eliminating child labour and ensuring all workers are safe and well-paid are welcome. However, companies can and must do more. They need to take responsibility for their own supply chains, and take remedial action if human rights abuses have occurred at any point in their supply chain. There should be no excuse for not investing time and resources to find out what’s really powering their cars.

As demand for electric cars grows, it’s in the interest of manufacturers at this year’s show to prove they’re not profiting from human rights abuses. They owe it to their customers – and to the miners who suffer to make their products.