Choose a weapon and destroy it with your signature

The Czech Republic is a significant EU exporter of military equipment. We are against the irresponsible exportation of weapons to countries with risk of human rights violations. By signing this petition you can express your disagreement with these exports.

The total volume of military equipment and weapons directed from the Czech Republic to Egypt in 2013.

Number of victims during the 2013-2014 protests in Egypt where the Czech republic exports military equipment.

The number of the countries with repressive regimes that violate human rights to which the Czech Republic exported military material.

The annual amount of money acquired from exports to problematic countries.

Nearly half of military material exported in 2013 was sold to customers in countries with repressive regimes.

The number of destroyed weapons

Whole text of the call

I would like to declare my concern about the Czech Republic being a significant exporter of military equipment to countries with repressive regimes that are violating human rights and lack standard control over the the movement of military equipment. Growth of the export to places, where the use of this equipment is unknown, has almost tripled in the last few years.

Only in 2017 the Czech Republic exported military equipment worth 21,1 billion CZK and almost half of this equipment was sent to regimes where risks of abuse of military materials are very high.

We are asking you: Do we know who we are sending military equipment to?

Your department plays a key and non-fungible role in evaluation of human rights risks within the license procedures, and your positive standpoint is a necessary condition for granting an export license.

For these reasons, dear Mr. minister, we would like to call for your consistent and responsible evaluation of human rights risks during military equipment exports. We believe, the Czech diplomacy should not approve cases when the military material trade is in contradiction with human rights obligations and goals of the Czech Republic, and is instrumental in political or economical interests.

Amnesty International (AI) has been warning the Ministry of Foreign Affairs to give attention to serious discrepancies between the declared support of democracy and human rights on the one hand, and the promotion of military equipment exports to risk countries on the other.

AI argues that in countries where there is a real risk of misuse of weapons for the purpose of suppressing human rights, weapon exports should not be permitted. This should apply not only with regard to the applicable criteria for the granting of licenses for weapon exports, but also with regard to the policy of promoting democracy in the transformation and development cooperation, which prioritizes the protection of human rights, local development and democratic values.

COUNTRIES WHERE THE CZECH REPUBLIC EXPORTED WEAPONS IN 2013

In 2015 the Czech Republic exported military equipment to 34 countries that severely violate human rights while lacking control standards for movement of weapons. These are often repressive regimes where the state does not have democratic control of the armed forces, lacks an independent judiciary system as well as police forces and elites who are loyal to their citizens. In total, these exports of 7,37 billion CZK represent 49,3% of total exports from the Czech Republic. 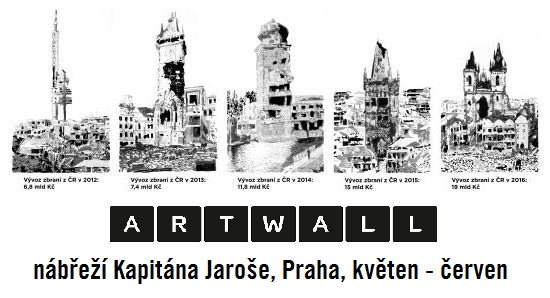 The supporting wall of the Letná park is decorated with paintings of the famous Prague towers: the Old Town tower, the Žižkov TV Tower, the Powder Tower, the Šítkov water-tower and the towers of the Týn church. These dominants of a city, often called „the city of a hundred towers“, is easily recognised not only by people living in Prague, but also visitors. The black and white depictions have a disturbing feel. Instead of touristic motives there are scenes from the city ruined by war.