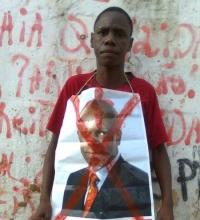 Manuel Chivonde Nito Alves (better known as Nito Alves) is a seventeen year old boy from Angola who has been detained for expressing his disagreement with the the president‘s policy. Amnesty International considers Nito Alves to be a prisoner of conscience, arrested solely for peacefully exercising his right to freedom of expression.

Nito Alves was arrested by the police on 12 September 2013, in the Viana municipality in Angola’s capital, Luanda. He was arrested after collecting T-shirts which he had ordered to be printed with slogans against the Angolan president. The T-shirts were intended to be worn by individuals at a demonstration organized for the following week, on 19 September in Luanda. The demonstration was organized by a group of young people known as the Movimento Revolucionário Angolano- MRA (Angolan Revolutionary Movement). The slogans on the T-shirts read “Out disgusting dictator” on the front, and “When war is necessary and urgent” on the back, a reference to the title of a book published in Angola in 2011, which called on young Angolans to participate more fully in public life.

Nito Alves was arrested without a warrant and taken to an empty house in a field where he was interrogated. Later in the day, he was taken to the police station in Viana and the next day he was transferred to the Direcção Provincial da Investigação Criminal (Directorate of Criminal Investigation) in Luanda. He was held without any communication for about three weeks. It was not until October 6th that he was able to speak to his lawyer and family in private. He was then transferred to the Central Prison in Luanda where he is being held in a cell with nine adults, in violation of Angolan and international human rights law. He now receives weekly visits from his family.

Conditions at the Comarca Central Prison are very bad: hygiene and sanitation is very poor and there is no drinking water. The water and food Mr. Alves does receive is provided by his family. Because of these conditions, Mr. Alves often complains of vomiting and diarrhea as well as severe headaches and bouts of malaria, but he has not received any medical treatment for these ailments.

Mr. Alves has not been formally charged. Initially he was accused of defamation against the president on the basis of the writing on the T-shirts, an accusation that was later changed to insult (ultraje) of the President. This charge is found under Article 25 of the 2010 law on crimes against the state, and is punishable by up to three years’ imprisonment. This incident marks the first time this article has been used.

Call for the immediate and unconditional release of Nito Alves online