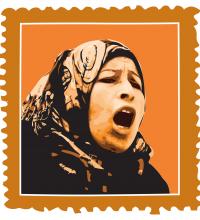 Residents of the village of Nabi Saleh, with solidarity from other Palestinian, Israeli and international activists, hold weekly non-violent demonstrations to demand an end to Israeli occupation and its associated policy of illegal settlement expansion. The Israeli security forces frequently meet these demonstrations with excessive and unnecessary force: since 2009 they have killed two protesters and injured hundreds of others. The army’s excessive use of force against the demonstrations affects the whole village and may constitute collective punishment, outlawed by the Fourth Geneva Convention.

Residents of the village of Nabi Saleh, with solidarity from other Palestinian, Israeli and international activists, hold weekly non-violent demonstrations to demand an end to Israeli occupation and its associated policy of illegal settlement expansion. Weekly demonstrations developed in late 2009 out of protests by residents of the villages of Nabi Saleh and Dier Nitham when settlers from a nearby Israeli settlement, Halamish, began a takeover of the Al-Qaws spring, which is situated in land between the two villages, owned and cultivated by Palestinians. In early 2009, settlers turned the spring into a tourist site and began to build structures in the area, illegally. In the process they destroyed Palestinian property including olive trees which the villagers partly depend upon for their livelihood. On 17 December 2009 the Israeli authorities banned Palestinians, including landowners, from access to the spring and the land around it, while allowing settlers to continue to build and have free access. This prompted the villagers to begin regular demonstrations to demand access to the spring. Palestinians are still prevented from accessing the spring and the military authorities have continued using excessive force to stop the Palestinian demonstrations and harass the residents.

The protests have developed to become weekly events composed mainly of peaceful marches towards the spring and the surrounding lands. The Israeli army has used excessive and unnecessary force against protesters by firing live ammunition, rubber-coated metal bullets, stun grenades and tear gas canisters at people and property, as well as by using batons and pepper spray against them. Additionally, the Israeli security forces regularly raid the village, conducting house searches and arresting people including children late at night. Bassem and Nariman Tamimi have had their house raided and ransacked numerous times. Nariman has been injured and detained a number of times while participating in demonstrations, most recently on 28 June 2013 during the usual Friday protest. Protestors have been arrested and charged with being in a "closed military zone" while on their way to the spring, and Bassem has been detained 11 times. Nine of these were without a charge, and he was convicted twice by a military court on charges Amnesty International believes were unfounded and worthy of his consideration as a prisoner of conscience. His children Wa’ed and Mohammad have been injured a number of times, while Wa’ed has been detained at least once.

On 17 November 2012, Nariman’s brother Rushdi Tamimi was shot in the back by Israeli soldiers at a protest in Nabi Saleh and died two days later in hospital. Video evidence shows that Israeli soldiers delayed his family from taking him to hospital in an ambulance. An Israeli military investigation into the incident shows that over 80 authorized live rounds were fired at Palestinian protesters that day.

Nabi Saleh is a village of about 550 residents in the Occupied Palestinian Territories (OPT), 20km north-west of the Palestinian capital, Ramallah. Most of the inhabitants are the extended Tamimi family; besides them, there are a few refugee families who moved to Nabi Saleh after Israel forced them to flee their homes in 1948. The village takes its name from a holy site in its centre, which is part of a traditional Sufi pilgrimage route. The village covers around 284 hectares, including farmland, most of which has been taken over by the neighbouring Israeli settlement of Halamish.

Halamish (also called Neve Tzuf) is an illegal Israeli settlement established in 1977 on lands that belong to the villages of Nabi Saleh and Dier Nitham. A few years after its establishment the settlement had around 400 residents; it has since grown to contain around 1,600. There is a military base in the settlement, where the army trains religious recruits and also frequently detains Palestinians, including demonstrators from Nabi Saleh.

Call for the end of excessive force against peaceful demonstrations online