The new Amnesty International campaign reminds of the absurdity of the Russian law against homosexual propaganda in relation with the upcoming football championship.

Touching the bottom – 15 days in jail. Showing affection – monetary penalty of 5.000 rubel. A kiss – deportation. The consequences of this russian law against the homosexual propaganda can be this extreme. Hence, Amnesty wants to call the worlds attention to this occurrences with its new campaign related to football.

The Russian law enacted in June 2013 concerning the ”Propaganda of unconventional sexual relations between adolescents” is also known as “the law against homosexual propaganda”. This Article 6.21 was added to the Russian legal text and became so a legal basis – for the authorities – for punishing those who promote “unconventional sexual relations”.

“Amnesty has the opinion that such a law violates the freedom of expression and therefore it fights for its abolishment. This law has a negative impact on the effort of LGBT organizations and individual activists”, points out Martin Balcar, leader of this campaign at Amnesty International Czech Republic.

This law is realized in praxis 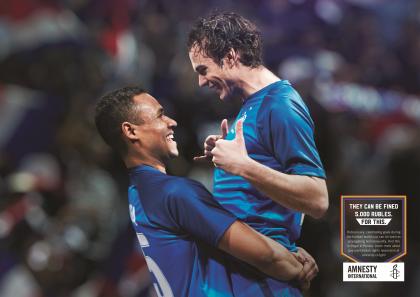 There is already a long list of people who got affected by this law, for example the LGBTI activists Nikolaj Alexejev, Nikolaj Bajev and Alexejev Kiselev. In January 2014, those 3 activists brought an action in front of the European Court of Human Rights by complaining that their rights determined in the European Convention of Human Rights are violated by the Russian government. In June 2017, the Court stated that Russia violates Article 10 (freedom of expression) and Article 14 (freedom of discrimination) of the ECHR and adjudged Russia to a monetary penalty for the activists. Russia appealed this verdict.

The LGBT activist from the Russian Samara, Edvokia Romanova have been accused based on the “homosexual propaganda” after she shared posts from the web page of the supranational Youth Coalition for Sexual and Reproductive Rights organization and articles concerning the equal treatment of LGBT people. Therefor, Edvokia was adjudged to a monetary penalty of around 650 pound.

The Chechen president lays it on the line

On June 31th 2017, the Russian LGBT Network Organization published an article about the persecution of LGBT people in Chechenia. This report with the title “They said, I’m not a human being, I’m nothing. I’d rather be a terrorist than a poof.” is based on testimonies of 33 people from Chechenia which got persecuted, illegally detained and tortured. This article states the details about the persecution of gays, lesbians, bisexuals and transsexuals in Chechenia. The statements of the victims uncovered information about the brute methods of torture of the Chechen authorities.

During an interview carried out by the HBO reporter David Scott with the Chechen president Ramzan Kadyrov, he was questioned to the persecutions of homosexuals in his country. By responding this question, Kadyrov laughed and said that “this is nonsense. That would not exist in his country. There would not be homosexuals and if so, one should take them along to Canada. Thank God (Allah). Take them far away from our homes. So we can depurate our bloods, if there are any, take them along”. While Kadyrov got pushed further to an answer, he seemed to be concerned reading the article about the persecution of homosexuals and stated, that “these (homosexuals) are devils. They are for sale. There are not human beings. God will crucify them for what they are accusing us”. 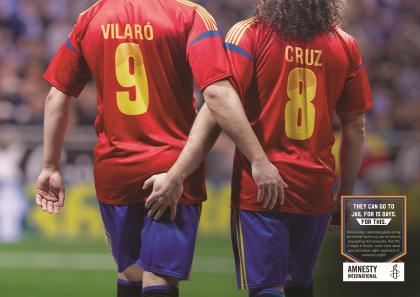 It is nearly ironical, that this interview was published on the date of the 8th anniversary of the death of Natalje Estemirova, a murdered and significant human rights defender and critic of Kadyrov.

It is a common way for the persecution of gays and lesbians in Russia to accuse them of other criminal cases to threaten them.